How is this year different from all other years?

The Sydney Taylor Award turned 50 last year, but this year saw another major milestone. For the first time, the winners were announced at the American Library Association (ALA) Youth Media Awards (the YMAs) along with the Newbery and Caldecott Medals. We worked for a  year to prepare for the big event, but all our preparation didn’t quite get me ready for the enormity of the moment. Here’s a behind-the-scenes look at the weekend of ALA’s Midwinter conference in Seattle and the big announcement on January 28, 2019.

The story of a broom, a potato and a butterfly The Youth Media Awards on Monday have amazing energy, enthusiasm… and props. When the committees are asked to rise and be recognized, a lot of them hold up objects that represent their winners. I was determined that if we were going to be part of the YMAs, we were going to do it right. And that meant finding props. In Seattle. With only an hour of free time to accomplish the mission.  My quest began with trying to find a Victorian London chimney sweep broom for Sweep. Where does one locate such a thing? Target, of course. Then onto Pike Place Market where I wandered around looking for anything that might have a butterfly on it to represent What the Night Sings. After a lot of dead ends, I found a butterfly change purse. Finally, a potato to symbolize the latkes in All-of-a-Kind Family Hanukkah. I went to a vegetable stall in the market and asked for the largest potato they had and left with a very sizable russet.

What we accomplished while sitting on the floor 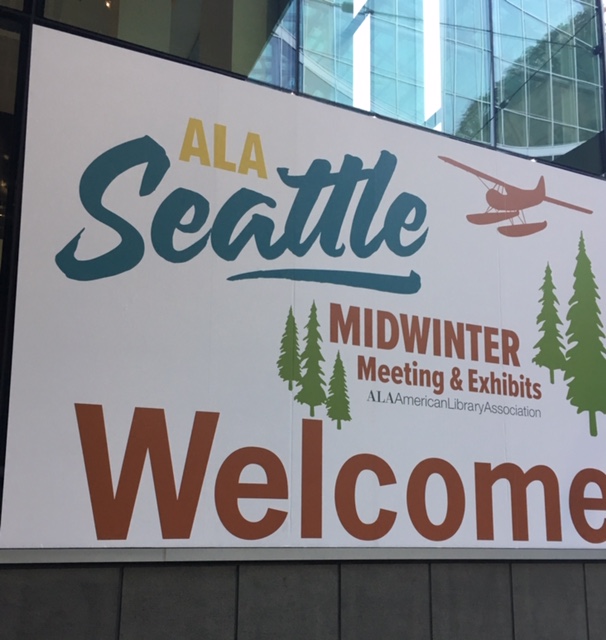 Now that I had everything I needed for Monday morning, I went to the press conference meeting for the award committee chairs on Friday night. It was exciting to be in the room with the chair from every award committee and feel part of the group. I was handed a folder with all the Sydney Taylor information. Late on Friday night, Sylvie Shaffer (one of the Sydney Taylor committee members) and I were both at a publisher party at the Seattle Public Library.  Instead of mingling, we sat on the floor of the library; deep in the stacks, proofreading the press release and script for our part of the webcast while the party swirled around us. The weekend went on, the events of ALA took over and suddenly Sunday night arrived. The year of careful prep work seemed to fade away and it felt like there was still so much left to do before the next day. I truly began to panic, but incoming chair Rebecca Levitan had arrived and helped me through it. We needed lists of press contacts. Final press releases. Social media posts. A million and one things. Rebecca and I sat on the floor of our hotel room, and went through one thing at a time, with wonderful people from the Association of Jewish Libraries helping us on email from other time zones. I think I finally went to bed at 1 am. It was a relief to get off the floor.

The number of pictures we took

Sleep was short, since we got up at 5 am. And then the picture taking started. Sylvie, Rebecca and I wanted to capture the moment as fully as possible. First the official ALA press photo. Then pictures in the hallway outside the press room. Pictures inside the empty ballroom (truly a thrill to be let in before the doors opened.) More pictures as our friends arrived. Moment-by-moment pictures during the actual announcement. So. Many. Pictures. 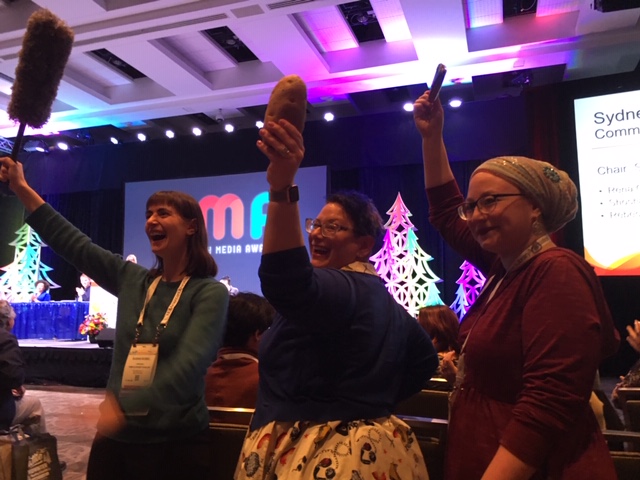 Despite all the work leading up to it, I don’t think anything could have prepared us for the actual moment when the Sydney Taylor awards were announced. We laughed. We cried. It was way better than Cats. It was so emotional, standing in front of over a thousand people, with our broom, potato and butterfly. I was expecting the moment to be big. I told everyone it would be big. It turned out it was huge. Enormous. Gargantuan. My phone lit up with congratulations from around the country- even while the announcement was happening. All of a sudden, everywhere we went at ALA, people knew about our winners. Publishers were waiting for us in their booths to affix Sydney Taylor stickers on the winning books. There were hundreds of likes and retweets on social media. The awards appeared in national publications for the first time. It was amazing. Thank you to all the fantastic winners for the wonderful books you wrote. There are three people in the pictures in this post, but it’s the whole Sydney Taylor committee that I would like to thank: Rena Citrin, Shoshana Flax, Rebecca Levitan, Sylvie Shaffer, Marjorie Shuster, Rivka Yerushalmi and past chair Ellen Tilman. So many people helped at the Association of Jewish Libraries including Heidi Rabinowitz, Dina Herbert, Kathy Bloomfield, Michelle Chesner, Sheryl Stahl, Emily Bergman, Elissa Gershowitz, Nancy Sack and Elliot Gertel. Thank you to the amazing staff at ALA. I am so impressed by the village it takes to put on the Youth Media Awards. Thank you to Jo Taylor Marshall for your support of the awards. Thank you to all past Sydney Taylor committees. I felt that we were standing on your shoulders and am grateful for all the amazing work you have done.

Everything ended well, except for the potato. It met a tragic early demise… and got eaten.